Blackmagic Design DaVinci Resolve is one of the most powerful video editing suites available that also runs on Linux.
There are some quirks with DaVinci Resolve under Linux and this guide will help you with those.

There are two versions available of Blackmagic Design DaVinci Resolve, the free version and the paid studio version:

The latest stable release of DaVinci Resolve 18 is version 18.1.1 (released 23 Nov 2022) and can be downloaded from the Blackmagic Design support site. Older major versions (17, 16, etc) are also still available and in case your hardware or OS version is not up to the task with the latest and greatest, these might still be a good option for you.

DaVinci Resolve is obviously not free software, open source or anything close to that, but it does use plenty of open source software internally like Qt (5.15 since 17.4 to be specific), SoX Resampler library libsoxr, PostgreSQL, gstreamer, curl, OpenCV 3.4.1 and FFMPEG 4.3.1. (Yep, ffmpeg, the all decoding and encoding video tool. The irony...). (And yes, I've tried replacing the ffmpeg libraries with ones that support more formats, no luck there unfortunately).

The Studio version also supports scripting with Python and Lua and external encoding plugins in C++. See the documentation and examples under the installation directory in Developer/Scripting for details if this interests you.

Resolve does have some hefty hardware requirements, a powerful multi core CPU and GPU with plenty of VRAM is highly recommended, especially if working on anything higher than Full HD or using GPU specific features like noise reduction. The open-source drivers will not work, you do need to use proprietary NVIDIA or AMD Radeon drivers.

Minimum system requirements for Resolve on Linux, according to Blackmagic, are:

You also need to have:

Experience has shown that you can work with less memory if you keep to basic features, 8-16GB memory is fine for basic cutting of SD, HD or Full HD footage. A NVIDIA GPU is highly recommended, AMD GPU does work too, but afaik, some effects and plugins are CUDA only and might be slower on AMD GPUs.

Any decent Linux distribution should be OK, the officially supported distribution is a very old CentOS 7.3 but who uses something like that anymore ? Experience has shown that for example Linux Mint works perfectly, and so should any Ubuntu derived distribution. Other distributions shoud be just fine too.

Make sure you have up to date GPU drivers and that your GPU is supported, minimum CUDA version is 11 or OpenCL 1.2. Also GPU with at least 4-6 GB of VRAM is highly recommended for any serious work. And for any GPU based features like noise reduction or effects, 4K resolution the more the better.

Note: Resolve is not the only application using precious GPU memory, your desktop environment, X11, Firefox, etc will also be using some it. Check with your GPU utilities in case you have low GPU memory issues.

You can find downloads of Resolve to the latest versions and also old version (great if your CPU/GPU is not up for the latest and greatest!) at Blackmagics support site, in the Latest downloads section.

Be sure to pick the right version, if it has Studio in the name then you need to buy a license activation code or have the license USB dongle. Unfortunately you can't easily switch between the Studio and Free version, it would be great if the Studio version would just limited the features if no license is found, but alas, it won't work.

To install DaVinci, first unzip the downloaded archive. It includes two files, the installer executable and an instruction pdf. The installer is an executable script so you will not need to use any package management utility to do the installation. Also converting the installer to a RPM or DEB is not required.

To start the installation you just simply execute the installer and follow the GUI wizard. Just click trough the prompts and let it do its thing. 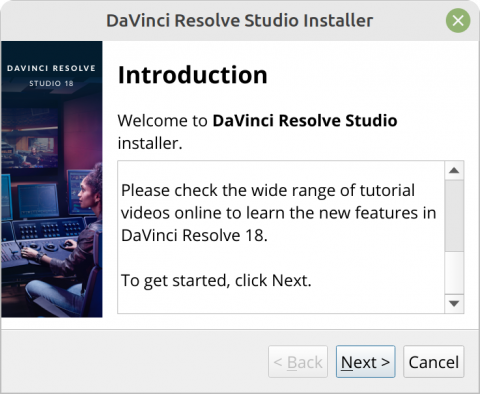 The installer will do a rudimentary check on required packages and will inform you if anything is missing, for example:

In case the installer complains about missing packages, just install them with your distributions package manager. For example for the above it would be:

When installer is done, you are ready to start DaVinci Resolve. 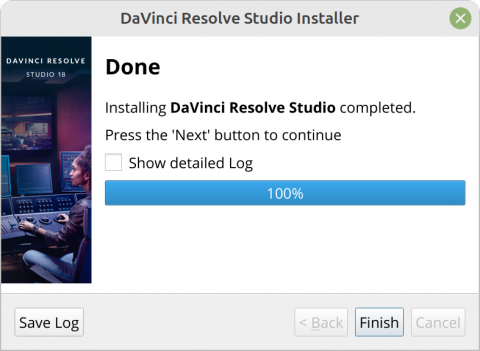 Unfortunately both the Free and Studio versions have some limitations in the audio and video decoders and encoders, under Linux. The Studio version is a bit better than the free version in this regard, but it is still much worse than on Windows or macOS.

The free versions has a very limited support for video decoders in all supported operating systems, but it is especially limited under Linux. The de-facto standard (consumer) video formats that are used everywhere like h264 and h265 are not supported at all. Fortunately there are workarounds, a bit time and space consuming, but still, pretty easy and straightforward.

There are also limitations in the encoding part, or exporting formats. Here too h264 or h265 is not supported under Linux in the free version.

Quality wise it is also recommended to export first in DNxHR and then encode with ffmpeg to h264 as hardware encoding can be worse. 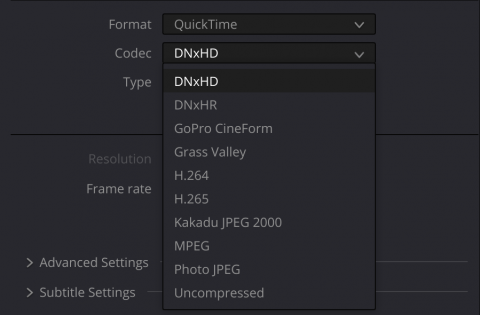 Support for decoding AAC codec is not available under Linux, at all. Not in Free and not in Studio. Video files with AAC audio will load, but the audio track will be silent.

Audio encoding support is very bad in both the free and studio versions, even the paid Studio version won't export anything other than uncompressed Liner PCM. Blame idiotic software patents for this. There is no support for any standard encoding (Advanced audio coding, aac) formats under Linux. Using uncompressed Linear PCM or IEEE Float audio is the best (and only) option and then re-muxing with ffmpeg and compressing the audio, see below for examples.

Note: Since 18.1, MP3 has been added as an lossy compression option. AAC is still missing.

There is nothing wrong with uncompressed audio, it is the best quality you can have after all. The issue is with playback, not all software and especially consumer hardware supports it in video containers.

Audio input/recording from standard audio devices was missing for a long time. Version 17.3 added support for Linux ALSA audio devices and it is possible to record on the Fairlight page.

Note that if you are using anything older than 17.3, then audio input (recording of audio) won't work.

Workarounds for encoder and decoder limitations

FFmpeg to the rescue! It does add an extra step, but not a big deal. Below are some examples on re-encoding (lossy) and re-muxing (lossless) to various video and audio combinations. For more details on using DNxHR or DNxHD see this tutorial.

Under some desktop environments you might have issues with scaling when using HiDPI displays. A workaround is to set a couple Qt environment variables:

Other quirks or limitations