You have landed in a clearing.  Frantically,  you rush through the woods toward the lights of the city far off in the distance.  A vision of your family dances in your head -- your wife and the newborn daughter you have not
yet seen.  You must save them.  As you finally scramble to a bluff panoramically overlooking the city,  you see the lights in the sky and you realize it is too late.  The flash nearly blinds you,  and when vision returns,  you feel nothing but anger as the massive mushroom cloud looms over the city.  You are too late to save your home,  but other cities remain, and they are still vulnerable.  It is up to you alone to unravel the plot and hold back the enemy attackers.

Zone 66 is a high-tech 32-bit arcade game for 386 and faster computers. You fly your fighter jet through a huge 360-degree scrolling playfield that's jam-packed with 256-color enemies and terrain.  Inflict massive damage on the enemy bunkers,  artilery,  and industrial sites,  leaving craters and devastated earth in your wake.

To get the maximum possible performance out of your system,  ZONE 66 uses an ultra fast mode on your 386 or 486 PC (called "flat protected mode").  The advantage is a super-fast game packed with graphics.

The disadvantage is, ZONE 66 will not work if you have any TSR's or memory managers loaded.  Most computers ARE set up to load these,  so you need to go through a few extra steps to start ZONE 66. 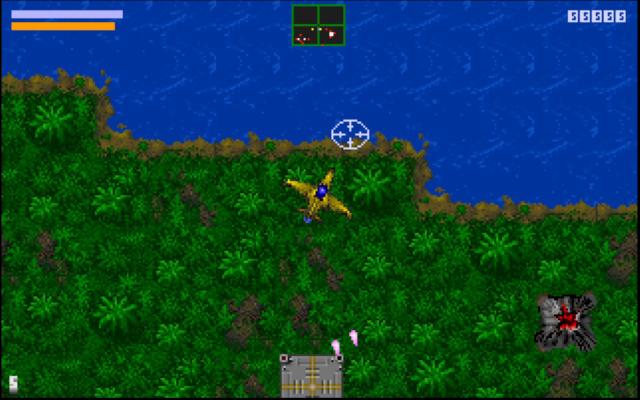