There are two tools available currently, one for Föli (buss stops) and one for Fölläri (bikes). See screenshot below for example outputs for both tools.

There is also an alternative version available that is written in Ada just for fun and reasons. (Reasons: My daughters middle name is Ada, and yes from Ada Lovelace, so dad must know the language, right ? So I got inspired to learn the basics of the Ada language and I wanted to do something somewhat usefull instead of the usual Hello World kinds of stuff.)

This is much simpler than the above two tools, but can work as a guide on how to handle http requests and JSON parsing using AWS and GNATCOLL libraries as finding out how they work with the extremly limited and bad documentation out there was quite a challenge (Stack Exchange is cool and all but for obscure languages, not so much). Anyway, the sources for Fölläri Tools Ada edition are available on github with build instructions. 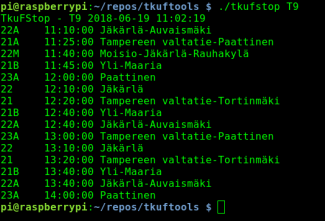 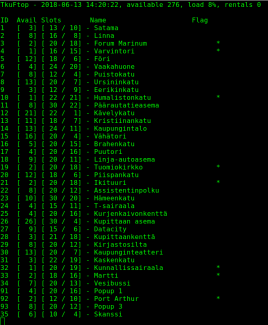